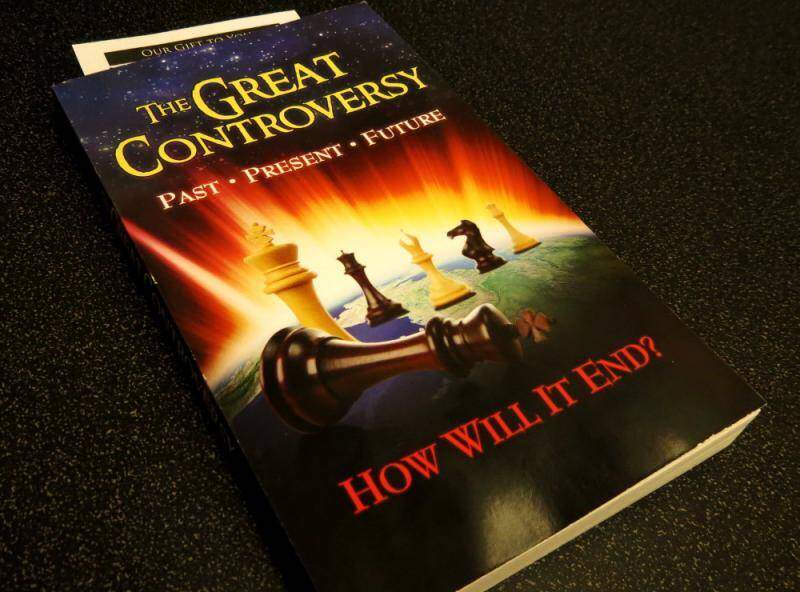 In 2015, hundreds of thousands of residents across North America received free copies of a book that’s over 150-years old. From New York to Chicago to San Francisco, almost 10 million copies have been delivered to mailboxes. Millions more shared around the globe. Most notably was the August 2015 distribution in Philadelphia one month before the arrival of Pope Francis. Needless to say, there was quite a stir over this book.

Why were they delivered? Who sent them? What was the book about?

Social media users were quick to vent their feelings about receiving the book. Some were angry to have a religious text delivered to them without asking for it. Others chose to read it as fiction and another group just tossed it out. That book is The Great Controversy, written by Ellen G. White, one of the founders of the Seventh-day Adventist church. So what should you do if this book happens to end up in your mailbox?

First, an overview of the book: The Great Controversy

Beginning with the destruction of Jerusalem in AD 70, the author delves into how the church that emerged from pagan Rome persecuted those who wanted to uphold the teachings of the Bible. The book goes on to chronicle the experiences of those who denounced the practices and teachings of the church of Rome. The life and work of reformers such as John Wycliffe, Jan Huss, Martin Luther, and Huldrych Zwingli are detailed and contrasted with papal leaders.

Ellen White outlines the emergence and establishment of America and the Advent movement. The book then takes a turn from historical to prophetic by describing future events like the rise of papal power and persecution of God’s people until the end of time.

Still, residents are curious as to why the book ends up in their mailbox unsolicited. Why are some Adventists adamant about sharing this book with their neighbors? Why are young people spending their summers going door to door in efforts to sell this book?

Countless people from all over the world have shared why Great Controversy was worth reading several times. Others have reported having been convicted by the Holy Spirit after reading the book.

Before ignoring the book or tossing it out, here are the top reasons you should consider reading The Great Controversy:

1. It speaks to current events.

If you’re curious about world events and the climax of it all, this book can help you understand how it all comes together. No matter your religious background (or lack thereof), everyone seems to believe that the world’s history will culminate with one massive event.

Christians believe that event will be the Second Coming of Jesus Christ, Buddhists and Hindus believe their deities will come and triumph over evil, while others believe the world will eventually become so greedy and war-torn that civilization may nearly destroy itself, or we’ll run out of resources.

Scientists claim that either colliding with a rogue planet or being vaporized by the sun are possible outcomes (among other theories), given enough time. Using the Bible as its foundation, Great Controversy explains how global events climax with the return of Jesus Christ.

All in all, this is a fascinating read that can provide you insight on why the political climate around the globe is changing, why violence is on the rise, and how you play a direct role in all that’s happening. It gives hope in Christ and helps remind readers that peace is possible in the midst of trouble.

2. It reminds readers to be prepared for what’s coming

Nothing is worse than being unprepared for a major event. Students fear a pop quiz they’re not ready for. Brides worry about having everything ready for their wedding day. Moms-to-be want all ducks in a row before the baby arrives and party hosts work tirelessly to ensure everything is set for when their guests arrive.

The Bible encourages us to be prepared for the Second Coming of Christ. The day of His return will be glorious for those who are expecting it, but a day of terror for those who are unprepared, The Great Controversy helps readers keep in mind that everything in this life leads up to the day when Jesus returns to make all things right again. To remain unprepared has devastating consequences that impact one’s eternity.

3. It explores the topic of the antichrist

The Bible’s Book of Revelation remains one of the mysteries in Christianity. And within that book, there is much debate over the power that is against Christ, referred to as the “antichrist.”

So who is the antichrist and how will we be able to identify this individual?

If those questions are relevant to you, that’s another reason to consider reading this book. Outlining the characteristics very clearly and exploring the clues the Bible gives about this power, the Great Controversy helps us deduce who the antichrist is and how to stay faithful to God even when the world wonders after the antichrist.

4. The reader learns about the Reformation and the shaping of Protestantism.

Whether an individual is Adventist, Baptist, Catholic, Lutheran, or Methodist, the Reformation is a crucial part of their church’s foundation. Knowing what led to the Reformation and what was accomplished by the stance of reformers such as Martin Luther, Huldrych Zwingli, and John Calvin (and others) is very beneficial to a Christian. By reading this book, you get an in-depth overview of this significant moment in world and Christian history.

5. It covers biblical doctrines such as the Sanctuary, death, and the Sabbath.

Do you remember when you were younger needing someone to cut up your food into smaller bites? As adults, we do this for kids so that eating could be easier, big chunks of food are not only uncomfortable but can be fatal. There are certain Bible teachings that need to be broken down so that we could digest them a bit easier. The importance of the Sanctuary, the Sabbath, what happens at death, and the Second Coming are a few teachings that can be very uncomfortable to mentally chew on. As we mature spiritually and mentally, it becomes easier to understand these concepts. In His wisdom, God has made provision so that we could grasp these teachings. The Great Controversy helps break down these doctrines.

6. It tells what’s going to happen in the future.

Yes, really. One of the biggest questions of the human mind is, “what’s going to happen?”

Kids want to know what the cafeteria will be serving for lunch and young adults may want to know who they will marry. At some point in the day and in our lives, we’re curious about something in the future.

That curiosity also extends to spiritual matters. God knew we would be curious about the future and so one of the identifying marks about a prophet was their ability to predict the future (Deut. 18: 20-22). While two-thirds of Great Controversy relates to past events, the last third covers future events in correlation with the Bible. God in His infinite love for us has given a glimpse of what the future holds. This kind of information will encourage us to stay focused on Him when a difficult future falls on our planet.

7. It encourages further study of the Bible

1 John 4:1 says, “Beloved, do not believe every spirit, but test the spirits to see whether they are from God, for many false prophets have gone out into the world.”

When you read a book like Great Controversy (or any book that claims to be inspired) the only way to know whether or not it’s credible is to compare it with the Bible.

“Look to God’s instructions and teachings! People who contradict His word are completely in the dark” (Isaiah 8:20, NLT).

If you decide to read the Great Controversy, know that you will have to go back to your ultimate guide, the Bible, to test what it says. This way, you will be diving deeper into Bible study.

When society seems split over a matter and you seem caught in the middle, unsure of what to do…do the research yourself. Don’t take anyone’s word for it that this book is either worth or not worth your time. The best way to be sure is to start with the first chapter. By seeking God’s wisdom, you will find that He will lead you in the way you should go.